The median prices of existing homes and condominiums that closed escrow during June hit record highs even as sales slowed largely because of a limited inventory, the Southland Regional Association of REALTORS® reported Thursday, July 18.

A total of 487 single-family homes changed owners last month, down 14.7 percent from a year ago. It was the lowest total for the month of June since the Association began keeping the statistic in 1984.

REALTORS® also assisted the sale of 158 condominiums during June, which was down 16.0 percent from a year ago, the third lowest total for any June going back 35 years.

“Low interest rates on home loans translated into greater buying power, which kept more prospective buyers in the hunt for a home,” said Dan Tresierras, president of the 10,300-member Southland Regional Association of REALTORS®. “Yet that wound up pushing resale prices higher as inventory, while showing some improvement compared to a year ago, has seen smaller gains since peaking earlier this year.

June was the first month since July 2018 to post a smaller inventory than the prior year. A total of 1,352 homes and condominiums were listed for sale at the end of June, down 1.2 percent from June 2018. Local Valley inventory hit a record low in December 2017 with 819 active listings yet had been trending higher since then.

This December saw the year-to-year increases peak with a 42.4 percent gain. Since then the increases have steadily slowed, a pattern that is appearing in other Southern California communities and nationwide. 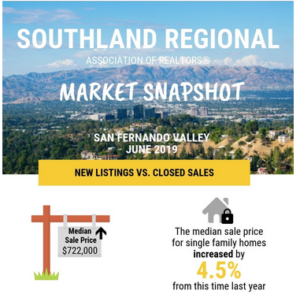 The 487 single-family homes that changed owners in June had a median price — meaning half were lower and half were higher — of $722,000. That was up 4.5 percent from a year ago, smashing through the prior record of $708,000 that was recorded in May and August of 2018. That compares to the $339,000 median recorded in December 2011, which was the low point of local prices since the Great Recession of last decade.

Pending escrows, a measure of future closed escrows, were down 15.0 percent to a total of 645.

Only two single-family homes in the Valley changed owners during June as a result of a foreclosure, the Southland Regional Association of REALTORS® reported. That represented a 0.3 percent share of the combined 645 homes and condominiums sold. An additional three homes sold closed escrow during June via a short sale — where the lender agrees to a sale price that is less than the outstanding loan balance — yet that was only a 0.5 percent share of the market.

Reflecting the limited inventory and the generally lower price points, none of the 158 Valley condominiums that changed hands during June went via foreclosure or a short sale. Condos spent an average of 42 days on the market while homes averaged 33 days.

The Southland Regional Association of REALTORS® is a local trade association with more than 10,300 members serving the San Fernando and Santa Clarita Valleys. SRAR is one of the largest local associations in the nation.