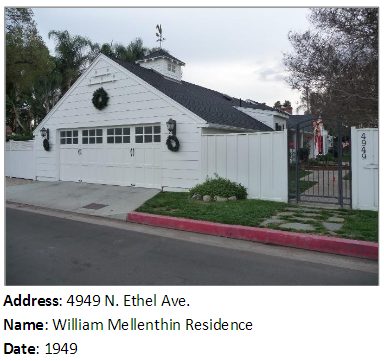 After the war hundreds of subdivisions were built in the Valley. The style of architecture popular at the time was the Ranch style and thousands of Ranch homes were built. One of these new neighborhoods was a development by William Mellenthin called Hidden Woods Sherman Oaks. Mellenthin’s homes were well known for their exaggerated dovecotes and were nicknamed “birdhouses”. When a lot of developers were constructing standard tract houses Mellenthin built homes that were a cut above both in architectural design and in the quality of the building material used. Some common features of these homes are the diamond pane windows and red brick fireplaces. So nice where the homes and the neighborhood that Mellenthin himself lived there.

The tree-lined streets, well-manicured lawns and neighborhood pride makes Hidden Woods one of the best pockets of Sherman Oaks